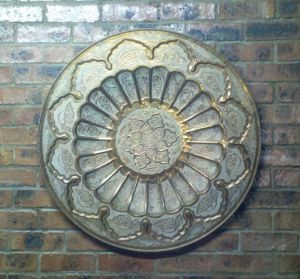 One of several decorative platters adorning the walls. I’m sure I heard they come from Afghanistan the last time I was there.

This past weekend I took advantage of Heritage Day to spend a few days with some of my family in a holiday house on the west coast, just a little way out from St Helena Bay. The visit, and others previously, was characterised by free-flowing drink (particularly sparkling wine), great food, interesting company and smaller activities punctuating the day. I took very few photographs of my own but I did select a couple taken by others, probably mostly by my mother.

I was in the first car to arrive at the house on Friday. It was immediately that we ran into a problem. Although the main gate is manual, the garage door is automatic and there is no front door. Normally this isn’t an issue but, just opposite the house, people were working on the electrical supply and we had no power. This left us with the prospect of waiting the hour and a bit it would take before power was restored. Luckily, that was not to be. The kids in the car climbed over the side gate to the back (a gate that we actually had a key for) and we were able to get in through the back door (which my aunt hadn’t known she had a key for). At least now we know for future, as waiting in the house for power is preferable to waiting in the car or outside.

On Saturday, the planned activity was to go horse-riding. I had done a couple of years of horse-riding as a kid, something that my oldest sister continued with and now teaches, but it had been over 10 years since I had last sat on a horse.

It didn’t take too long to get used to it again, helped by it being an easy ride that never went faster than a trot. We rode for about an hour-and-a-half, crossing over a few fields to do a stretch on the beach before heading back again. While it was generally calm there was an exception when a buck leapt out from behind a bush, startling my horse! I was able to grab its neck though and pull myself back up without falling.

I should also stress the importance of having the correct and well-fitting protective gear. As I hadn’t ridden in so long, I no longer had a hat of my own and had to borrow one. It was quite a tight fit and by the time I returned I had a headache, which disappeared within less than a minute after removing the hat. Unfortunately, there was no equipment to stop my back aching the next day. It seems as though I need to work on improving my posture.

The beach, only a minute or two’s walk from the house.

The following day I went for a long walk, almost 9000 steps, according to one of the walkers’ pedometer, along the beach. My aunt and I met two adorable cats just before the beach but the photo I took of them appears to have been corrupted. As the tide was out, we were able to examine some of the rocks and rock pools that would normally be submerged and perhaps completely unseen. The ones we found were fairly nice but were mostly filled with snails, limpets and anemones. I would’ve liked to have seen starfish, crabs and, if we were really lucky, an octopus. As it was, the only crabs I saw were dead, probably killed by the seagulls.

On Sunday there were two notable occurrences. The first concerned a 1000 piece jigsaw puzzle that one of the people had brought. I had done a lot of work on it the previous day, constructing the entire border and the majority of three zebras at a waterhole. Some other people had added a bit more since then but, when the cleaners came through, they just put the entire puzzle back into the box! Possibly they had no idea what it was and just put it away like other toys or, if you wish to ascribe a more malicious motivation, it could’ve been revenge. Earlier that day, they had left their clothes on top of the washing machine while they were working. My aunt put them inside without realising that they had their cigarettes inside. The most depressing part of the whole incident was that we had just bought a puzzle mat which could be rolled up to store a puzzle away without breaking it. 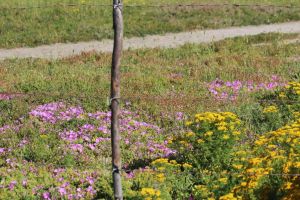 Secondly, I got to see Sharknado. I’d heard so much about that movie and it didn’t disappoint. It is completely ridiculous. The plot makes no sense, the characters aren’t believable, the effects are terrible… and that all translates into quite a good time. Not everyone was a fan though, saying that it was just too stupid but that’s the fun of it.

A near constant feature of the holiday was the great food and drink. We mostly indulged in Spanish Cava but I also enjoyed Amarula and was introduced to Sangria, something I think should feature at the next big event too. I was one of only two vegetarians present although there was still no shortage of food options. I can’t remember everything I ate but there was dal and rice, a cauliflower and cheese dish and particularly good stir-fry of which I, unfortunately, only had one helping.

The last time that I was there, I began reading Christopher Hitchens’ Arguably. I am pleased to say that I finished it before returning, if only five minutes before leaving, and took advantage of my time on holiday to begin, and make a fair amount of headway in, The Oxford Book of Modern Science Writing. I can’t say I’ve found all of the essays to be brilliant but some have certainly been interesting and informative and it it’s quite nice to read Dawkins’ comments on each piece.

There was, of course, plenty more that I could talk about but I think this is sufficient to give you a taste of what I was doing this past weekend. Now it’s time to look forward to the next one.