The Unexpected Truth About Animals (2016) by Lucy Cooke 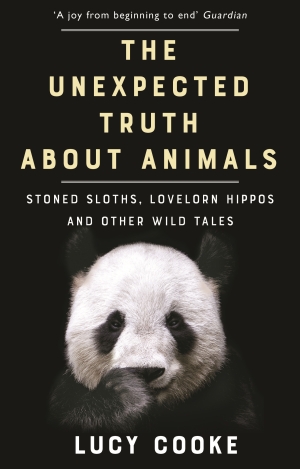 Where most books just talk about what we know about a particular animal, Cooke tells us what we used to think about them and then corrects those, sometimes astoundingly wrong, misconceptions. So when we learn about the migration of Storks, we get to marvel that Charles Morton used to think they flew to the moon and back. Sometimes the process of learning about animals is brutal as when the, fairly sadistic, Italian priest Lazzaro Spallanzani tried to learn the secrets of bats’ echolocation by, among other mutilations, cutting out their eyes.

One thing that certainly stands out, is that nearly all the chapters have an emphasis on the animal’s sex. This can be amusing, like how hunters used to believe that beavers would bite off their own scrotum to rid themselves of the valuable castoreum (which doesn’t even come from the scrotum); just strange such as the testosterone fuelled hyena females whose external genitalia is nearly identical to the males’ and who can even achieve an erection; to the disturbing stories from a 1915 paper of penguins engaged in masturbation, homosexuality, paedophilia and necrophilia which were so shocking that the Natural History Museum of London refused to publish it and which was only rediscovered in 2009.

Through all of it, the one constant is its excellence. Lucy Cooke was educated at Oxford and tutored by Richard Dawkins. Whether coincidence or not, she displays the same impressive breadth of knowledge and writing talent as him. No matter what you want, this book has it; animals, sex, science, history, comedy. I can easily say that this has been one of the most interesting and entertaining reads in recent memory and highly recommend it.

Areopagitica is the text of a speech presented to the parliament of England to argue against the proposed law that books should be licenced before publication. I decided to read this as it was recommended by Christopher Hitchens in brilliant speech from 2006. In it, he said that the three important texts that anyone should read if they wanted to discuss freedom of speech were John Stuart Mill’s On Liberty, which I read in 2017, the introduction to Thomas Paine’s The Age of Reason (only a single paragraph) and John Milton’s Areopagitica. Now I have read these formative texts.

There are several points that Milton makes from history, theology and philosophy. There are practical matters, such as whether the censors are capable of the task set out for them and, even if they are, the important question of who can judge the censors are doing the right job. And, if the books are so corrupting, wouldn’t the censors would be the most corrupted? Other points include the limits it would pose to the spread of truth and Milton makes the point that to the pure mind, all things are pure. Even the worst book would only serve as a warning or guide on what to avoid.

Much of the book, particularly the start and ending, are difficult to read due to the archaic structure but, when it comes to the actual arguments, it becomes a bit easier to follow. There are certainly a number of good points and, although I do not think it is nearly as good as On Liberty, the message is still vital in our present times. I find myself in full agreement with Milton when he says, “Give me the liberty to know, to utter, and to argue freely according to conscience, above all liberties.”

This is the fourth year I’m doing this (2019, 2018, 2017) and I’m hoping to read two books per month. It’s a challenge but certainly not impossible; I just need to make the time and do it. I think making these lists has already helped me keep reading.

10/03/2020 Added No One Is Too Small To Make A Difference and Outgrowing God: A Beginner’s Guide.

4/07/2020 Added The Unexpected Truth about Animals and Areopagitica.

38/12/2020 Added Darwin’s Ghosts, Strange Case Of Dr Jekyll And Mr Hyde And Other Stories and Furries Among Us 2.

This was a Christmas gift and something I’d been eager to read. Edward Snowden was the one who leaked the existence of PRISM and that the democratic societies in the world were willing to trample on the rights of their citizens just as much as the dictatorships and autocracies they ostensibly opposed. Since then we’ve heard time and time again how both nation states and large corporations have disregarded the rights and interests of people for their own benefit.

The book itself is fascinating, both as an autobiography of one of the heroes of our generation and also to get a glimpse into the secretive world of government espionage. It’s interesting to see how Snowden grew up and what events influenced him. I do wonder how much of it really transpired that way and how much has changed in the process of looking back with new insights. I suppose it doesn’t really matter. It’s entertaining, informative, inspiring and worth reading for everyone.