I am happy to report that the last two papers from my PhD are now available for everyone to read!

Two Is Better Than One: Studying Ustilago bromivora–Brachypodium Compatibility by Using a Hybrid Pathogen

This, along with the U. bromivora genome paper,  is probably the most important paper from my PhD. Those two papers formed the basis of my thesis. Although I did not manage to fully answer the question I set out to answer, this is a paper where most of the experiments, most of the analysis and most of the writing was done by me, so it is special to me. It’s also quite interesting! If you want to know exactly what we learned, you can read the paper itself but I will give you a brief summary of what we were trying to learn. 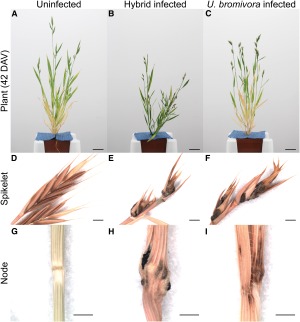 We knew there were two very closely-related fungal species which could infect different host plants. This told us that although they were very similar, there was something important about them that was different; we wanted to know what that was. Even more exciting, we could create a hybrid between the two fungi that was still able to infect one of the host plants. What I was trying to do was take the hybrid and breed it over and over again with the parent that couldn’t infect while making sure that the hybrid could infect. After enough generations, we should then find the hybrid would be genetically almost identical to the non-infecting parent but with just a tiny bit of the infecting parent inside it. That would tell us what the difference between them was and we could then try to figure out how that part of the genome led to interactions with the plant.

Most of the delay for me writing this post was actually waiting for this paper to be open access. (See my posts about open access here, here and here.) The paper was originally published at the end of October last year but very few people could read it. I had to have a lot of conversations with different people to get the open access fees paid. Even then it probably took over a month before the payments went through and the journal removed the restrictions!

This was based on a screen that I performed during my PhD but which I didn’t have time to follow up on. Andre took over the project though, performed the missing experiments and then wrote the text. This work was exploratory and brings up some cool possibilities which still need to be confirmed.

When fungi infect plants, they use small proteins called effectors to manipulate their host. Traditionally it was thought that each effector acted on its own to bring about a specific effect. The screen I did was designed to see whether effectors might also work together, something which had almost never been investigated. The screen I performed showed that many effectors were able to work together, which opens up a whole bunch of new ways of thinking about how fungi infect plants.

It’s not completely settled yet though. All we were able to show was that the proteins were able to interact under certain test conditions. It’s still necessary to show that those interactions happen during an actual infection and that they matter rather than just being inadvertent. Answering those questions is a lot more difficult but I’m sure we will get some exciting news before too long.