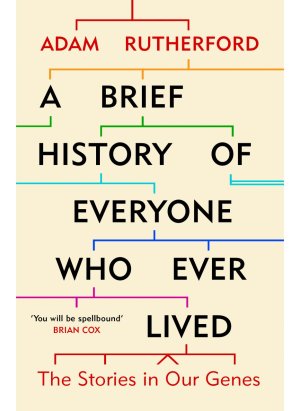 I got this book from my family when I went back to South Africa. I can’t recall whether it was a Christmas or birthday present. In any case, I spent the last two-and-a-bit days in the Czech Republic for a PhD retreat and was able  to use some of the time there to finish reading this book. Overall, I liked it but with some reservations.

I did not care for the first chapter which was a major contributing factor to why I read The Conquest of Bread first. It deals with human evolution (early hominid species) which I find tedious and dull at the best of times but it also felt like the writing was trying too hard to be flowery and poetic. Maybe the problem was just the content because I didn’t notice that being an issue in the later chapters and really enjoyed them. While I’m on the subject of the writing, I was really impressed by how he showed genome structure in the text at several points.

There was one chapter about race which I was particularly interested in and partially disappointed by. It’s a big issue with some people even denying it exists and others attributing all sorts of nonsense to specific races and thinking it gives them licence to treat others differently. The chapter is constructed rather strangely, it’s already 39 pages in before Rutherford discusses what is meant by race. If you’re going to discuss any topic you need to make sure everyone is on the same page. Even then, it seemed like he was struggling to reconcile his politics with his science. He brings up a lot of good points and its an excellent chapter overall but, in the end, he seems to be saying that race is continuous and messy and therefore the terms are meaningless. But there are plenty of continuous and messy things (he brings up genres of books) where classification is still useful. Biology is messy and categories can be fuzzy but that doesn’t mean they should be discarded.

1 thought on “New book read: A Brief History of Everyone Who Ever Lived”