One of my set work books in English at high school was Fahrenheit 451 by Ray Bradbury. The class, myself included, weren’t interested, although now I expect I would have a greater appreciation of the novel. So what made me read one of the same author’s short stories; There Will Come Soft Rains? Was it a new appreciation of classic literature that came with maturity? Partly. Mostly it was that I learned that the story was referenced in Fallout 3, a game I enjoyed.

Perhaps some people will find it strange that a game would reference such things. Maybe they still think that games are just mindless entertainment that requires no imagination and no thought. There are still games like that, and I think they have their place too, but there are other games that are far more involved and offer a lot more. I think video games are the modern equivalent of the novel.

I’m sure many gamers would agree with me but not necessarily those people who don’t play games or who grew up before the 80’s and 90’s when video games were becoming popular. For example, in this essay asking whether there should be a sin tax on junk entertainment (there shouldn’t), Thomas Wells names three different video games as junk entertainment. This is contrasted with high art, using example such as Beethoven and Dostoyevsky.

That’s all well and good but shouldn’t he contrast those casual games with high art from the same medium? It’s unclear whether he believes that games categorically are never high or true art or if he is just ignorant of the sort of games that could be considered to be high art. Nostalgia Critic’s video Are Video Games Art? gives a much better take on the development of video games and reasons why some games could be seen as high art. This includes comparing the growth of video games to that of film; from where film was not taken seriously as an artform to the current view where films can be true art.

Games have moved along from the time of Super Mario Bros and Doom where the story was barely mentioned, if at all, and the only thing that mattered was fulfilling the objectives. These days you get games that have complicated and involved story lines, that build whole new worlds and take pains to develop characters that the players will identify with. Doesn’t that make them as much of an artform as a novel? Many games have actually been adapted as novels. The Assassin’s Creed games have been converted into a series of books by Oliver Bowden, each one covering a single game. Other books merely take the game world and characters and develop a whole new story, such as a Devil May Cry novel I have. Adaptations of games into other media isn’t even limited to books. Devil May Cry was also adapted into an anime series. Final Fantasy, Resident Evil and Tomb Raider have all spawned multiple movies. Actors and actresses from films are now being recruited into providing voices for games.

Some might say that games prevent people from using their imagination. That criticism would apply just as much to movies but it really doesn’t make sense in the world of gaming. Games are interactive and player input is absolutely critical, not only for the gaming side but the story side. A game like Fallout: New Vegas has a rich backstory of its own but it is also a dynamic world that adapts to the player’s actions. Depending on your choices in the game you will have up to four different endings, each of which comes in slightly different flavours depending on your karma level at the end and that’s in addition to the many side quests. Your choices directly influence the story that will unfold.

At other times your choices have more subtle effects. In Dishonored you can play as an assassin and kill enemies to reach the end or you can utilise your powers to sneak undetected and find ways to neutralise targets without killing them. The effects on the game are more subtle; the more you kill the darker the storyline becomes but for the most part it is fixed. However, this way a game can engage players in thinking about the ethics of their actions. Should I kill this person or is there a better way? The game provides an opportunity for personal reflection.

At times, the choices can be less clear cut. In Fallout: New Vegas you will meet a group of sharecroppers struggling to tend their dying fields in the desert. Later you discover the fields are poisoned by a radiation leak from an underground vault. You can shut down the vault’s reactor remotely and save the farmers’ crops but you also learn that there are people trapped in the vault. There is no way to free them but as long as the reactor is working they can survive inside. Either you will choose to shut down the reactor and save the crops and kill the vault dwellers or you will let the vault dwellers live but kill the crops and starve the farmers. The choice is yours.

There is another aspect of gaming that non-gamers might not be aware of, modding. Many games have tools that allow users to build their own items or maps or scenarios for the game. User-created content is a big part of some games and, while some suffers from obvious defects due to lack of training or ability, many users create amazing modifications that at times surpass the original. There are two main examples that come to my mind when thinking about user creations and that is Dota 2 and Counter Strike. Both were player made modifications to existing games, Warcraft III and Half Life respectively, and both were subsequently bought out and developed into stand-alone games. Incidentally, both were purchased by Valve.

Gaming as a sport 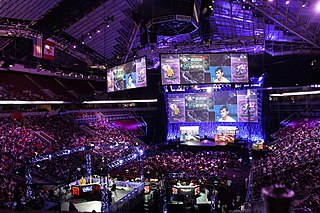 The stage and crowd at KeyArena for The International 2014.

While we’re on the topic of Dota 2, I also want to briefly mention e-sports. This July saw the fourth edition of The International, the Dota 2 world championships. I’m sure some will think it’s crazy but The International had a $5 million grand prize and the US government recognises League of Legends players as professional athletes. The International was even streamed on ESPN’s online service. I’m not sure if any schools are going to be including Dota 2 or similar games as a school sport any time soon but it is possible to earn national colours through e-sports, including Dota 2.

Hopefully this has been informative for those that don’t play games and that they can now see that there is a lot more to it than mindless entertainment. Not all games are junk and some are up there with films and novels as true art. Games have developed a lot and now contain incredibly rich stories as well as opportunities for players to interact with the world and characters to influence the outcome in a way that is just not possible with films and books. Tools provided for these games allow for expressions of creativity that would be impossible for a person to do alone and game mods made by ordinary players have been developed into multi million dollar professional tournaments. Not everyone is going to like gaming but it’s only going to grow and it will become necessary to at least be aware of it.

1 thought on “Gaming is not just mindless entertainment”