Today marks the second birthday of my blog. You can read about the first birthday celebrations here. Hopefully the quality of posts has improved since last year, although I know that the overall number has decreased from 100 to 68. There have been some special moments this year which I didn’t include in my top 10 posts are worth noting. Early in the year saw the first guest post (I had a second one planned but that seems to have fallen away) and, a few weeks ago, the publication of my first scientific paper.

Unfortunately there has been a reduction in the average number of hits. This could be due to having fewer posts this year or perhaps because a lot of last year’s traffic was due to the controversy over The Spear. More important than total numbers, though, are the people who keep returning. The number of followers has increased from 45 to 118! To be honest, I’m not sure all of them are real people. I look at the pages of everyone that watches me and many join because of specific posts that align with their interests. However, a large number of people’s blogs are focused on monetizing blogs and that sort of thing. Now it’s entirely possible that they are interested (Please don’t take offence if you are one of them) but there doesn’t appear to be much of an overlap in interests and those are common spam topics.

The visitors I do get still come from all around the world. The map I show here is for visitors from the last 365 days. If we count for all time then there are a few extra countries that show up, although most of those only contribute a few hits. In the top 10 this year, Hong Kong was a surprising addition with nearly all its hits coming from this year. 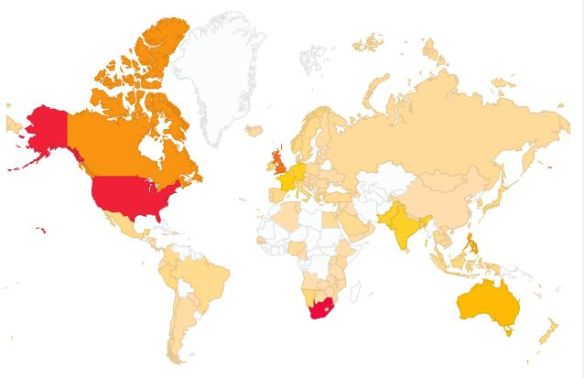 E&R map of visitors. The darker the colour the more hits from that country.

The most important part of my annual celebration is showcasing the 10 best or most important posts of the year. I’m not particularly rigorous about the selection though and it is also a very subjective measure but I think they do serve as a good starting point if one wants to see what my blog offers. I’m presenting them in chronological order.

1. Showing the importance of evidence
This post describes three talks from the MRC Early Career Scientist Conference in 2012. I used it to point out why and how evidence is needed to support various views and the dangers when it’s lacking. I will soon be posting a report on the Southern African Society of Human Genetics conference which I recently attended and was responsible for the lack of posts over the past week.

2. Western laws constricting free speech
I think freedom of speech is the most important human right and needs to be protected. Unfortunately it’s not only autocratic regimes that try to undermine it, it happens in Western democracies too. If we continue to censor everything that we disagree with or that offends us we will be depriving ourselves of other points of view and risking continuing practices that are not in our best interests. Just because something is popular or people sacrificed for it or is seen to deserve respect doesn’t necessarily mean that it is correct or that it can’t be improved. If there’s no discussion, we will never know.

3. Don’t limit inadvertent learning
I think it’s possible to learn outside of actually studying. Even when playing video games, watching videos or whatever else, you have the opportunity to pick up useful information. Sometimes when we bring in media from other countries and cultures we change it to make it more familiar. In this post I worry about the opportunities to learn from other cultures that are lost during this process.

4. How do we know if something works? and Coming to terms with randomisation
These two go together as they both touch on the same subject, randomised controlled trials (RCTs), and are both inspired by Ben Goldacre’s book, Bad Pharma. The first one describes RCTs and why they are needed while the second deals with the issue of randomness, something people are not happy with.

5. Why can’t atheists leave the religious alone?
In response to some articles I had seen where it was said that atheists should stop arguing about religion. The problem, as illustrated in the post, is that even if atheists say nothing about religion, religion is still so tightly woven into society that it affects them.

6. Who are we really?
This was an attempt of mine to win a science writing competition. It didn’t but I’m sharing it here because I think the topic is particularly interesting. Here I mention the microbiome, the collection of bacteria that live inside our bodies, and what they mean for us, both in terms of health and identity. This is also a possible research area I’m looking at while thinking about a PhD.

7. Balancing privacy and security
I wrote this to outline some of the risks that were inherent in having a DNA database in South Africa even though it has a number of benefits. Those same risks apply to many large security projects because they are often based on human nature. People lie, make mistakes and can be bribed. Just because they are in the police or the government doesn’t mean that they are any more trustworthy than any other person on the street. It was also written just as the PRISM scandal was being revealed and is worth reading in light of that as well.

8. Evidence is not optional in medicine
It’s bad enough that there are alternative medicine practitioners that disregard evidence for treatments in favour of comforting nonsense but it’s scary when real doctors share those views. This post was written about an article in the South African Medical Journal that I found a bit disturbing with regards to the attitude it displayed at evidence-based medicine.

10. Gay marriage scientifically proven wrong… not quite
This is my take-down of Nigerian student Chibuihem Amalaha’s supposed proof that homosexuality is wrong. I think it’s important because it both showcases a serious problem in Africa (the stigma and criminalisation of homosexuality) and the more general problem of using “science” badly. In this case we see a number of examples that are cherry-picked, irrelevant and sometimes have absolutely nothing to do with the topic.