One morning this month, as I left for university, I saw a spider-web hanging between two poles in my fence. There was a soft drizzle and the web was heavy with rain drops. I almost went past it but changed my mind, went back and took a photograph before leaving. It’s lucky I did as the web was gone by the time I returned, presumably torn apart by the wind and rain. Ideally, I would’ve liked to have focused only on the web and had everything else blurred but I only had my phone available. In addition, I’m also not sure which settings adjust the depth, just that it can be done. 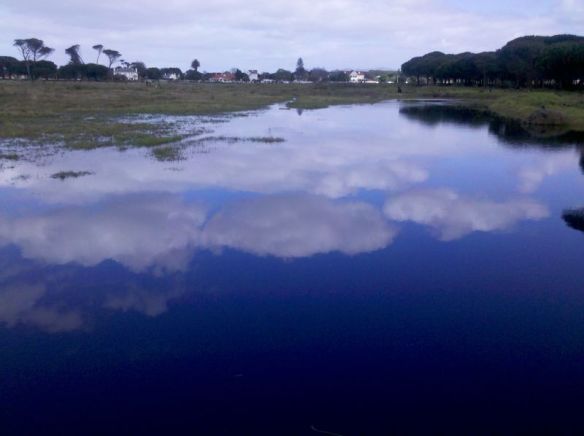 Reflection of the clouds in a puddle on Rondebosch Common.

You might remember Rondebosch Common from a post I made last December. I still go walking on the common, though it’s more often around the common now. That’s partly because I get a lot more walking done and partly because it’s all wet now. This picture shows just how wet it is, as well as a beautiful reflection of the clouds. When it’s all dry again, I’ll try remember to go back to this spot and take a new picture. 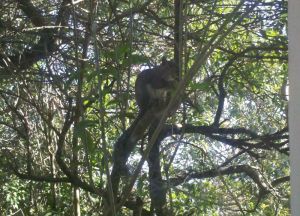 A squirrel in my garden.

Jerry Coyne isn’t the only with squirrels to show off. This is a photograph of a squirrel just outside my bathroom window. I’ve only seen it once but my sister had seen and photographed it a few days earlier. I’d guess it’s an eastern gray squirrel, which is not native. Although they probably shouldn’t be around here, they are extremely cute.

Snake from the common

Most recently, I went walking around the common with a friend of mine and spied this little guy on the side of the path. It seems, to me, to be a common slug-eater. They are pretty common, if you look for them. As I kid, I found a few in my garden and it was very easy to find them in my aunt’s garden. I tried keeping one or two as pets before but, as I recall, they always escaped.

The most memorable incident was after a small fire in the wild patch at the end of a nearby sports field. I found a number of baby slug-eaters under a rock, brought them home and put them in a shoe box. When I got home from school the following day, they had all escaped into the house, about eight or 10 of them. We found and released some, and my mom says she watched a few leave, and I assume the rest found their way back into the wild. After that I just left them in the garden.