It should be fairly obvious to any educated person but South Africa is failing because there is a complete absence of leadership. One might even go so far as to say the leadership that there is is actually detrimental to the country. I’d like to take this opportunity to vent my frustrations about the sheer idiocy I encounter every time I read the news.

At the start of the year we had an unemployment rate of 25% (Closer to 37% if you include the people who have given up looking) and we currently have more people on welfare than paying taxes! Ninety people are employed for every 100 on social welfare. This situation cannot go on for ever.

We also have approximately two protests per day, down from 15 per day in 2004/2005. Naturally this is disastrous for the economy and the value of the Rand has declined sharply over the last 23 years. 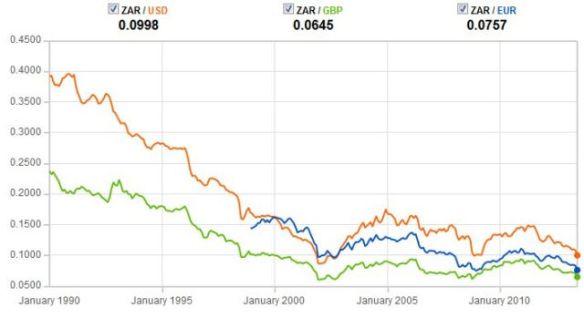 Falling exchange rate over the last 23 years. Rand against the US Dollar, British Pound and Euro. (Source: http://www.oanda.com)

One might expect then that we would get leaders thinking hard and making the tough calls that can try bring the country back on course, instead of steering it straight off a cliff. Instead, what we get is the President standing up and saying we should stop criticising the country. Presumably, if we just ignore all the problems they will go away on their own. Not likely.

It’s not all negative though. He did take time out to condemn xenophobia. This is important when 42% of the youth think foreigners are bad for the country. Of course, there’s also a saying that goes something along the lines of “practice what you preach.” His comments might mean more if the government isn’t also interested in preventing foreigners from owning land in the country. So xenophobia is bad but government policies that exclude foreigners are good?

Contradictions seem to be the order of the day though (and inappropriate behaviour). Some protesters recently have taken to showing their displeasure by throwing human faeces wherever they like. That’s not the sort of thing civilised people do so naturally the involved political bodies apologised and promised to discipline those involved. I’m kidding, of course. The ANCYL instead said that they disagreed with the methods but that the protestors would not be discipled and deserved an award! While their busy trying to convince people it’s an appropriate response, I hope the people are wondering why their response wasn’t to clean their own toilets rather than make a mess elsewhere. The irony comes from the accompanying statement:

It sounds so reasonable. It also sounds a bit different to what happened last year…

and in the ANCYL’s own words…

We will take our action right there in the city center not in Khayelitsha where our people live. We will take it there to the business centre. We will bring the city to a standstill.

Aside from that we have people that are not only stuck in the past but want to repeat it. There are people seriously suggesting copying what was done during apartheid. Obviously they didn’t hear the one about two wrongs not making a right. It’s ridiculous to say that something was terrible and then suggest doing the same thing. That doesn’t fix things, it just makes them worse.

I suppose I should end with the ANC again. They are, after all, the ruling party and have nothing but society’s best interests at heart. That’s why they were appalled at the allegations of corruption levelled at one of their mayors. Indeed, when the mayor was kicked out in a vote of no confidence they accepted the results of the democratic process they claim to hold dear. Actually that’s not quite what happened. The mayor was kicked out in a unanimous vote of no confidence which was even supported by 16 ANC councillors. Fourteen have since been expelled for ill-discipline. The ANC is more interested in punishing those that have principles than those that are corrupt.

That is why South Africa is where it is.

1 thought on “Why South Africa is failing”