This is a guest post written by Michael Kent who is doing a PhD in climatology at UCT and is one of the assistant tutors at Cape Town Nihongo Kai, our Japanese school. He has agreed to share his path into science and how he has been able to combine his studies with his other interests.

Although in 2003 I was finishing my last year of high school, I still had no clue what I wanted to do or study the following year. What I did know was that I enjoyed doing geography. This helped cement the idea that I should go and study further, and after some help from an advisor at school, I applied to do related courses at the University of Cape Town (UCT). Fortunately, my application was accepted and I began my studies in 2004.

My first year of university could best be described as a learning curve. One of the first things I learnt was that I didn’t have to have done computer science at school in order to pursue it at university. This was great news to me as I had wanted to pursue it at school, but had failed the aptitude test that was required to enter it. Now at university, I decided to drop my physics course and take up computer science instead. A student advisor cautioned me about doing two streams (computer science and environmental science), but I was too keen to miss this opportunity.

At the end of my first year, I realised that I should have taken the student advisor’s opinion a little more seriously. While I had passed the year, I had come really close to being rejected from university based on my poor academic performance. I had done pretty much every combination of failing and passing courses as was humanly possible. My one computer science lecturer saw that I was struggling, and suggested a time management book, which helped a great deal in me prioritising my studies.

By 2007 I had already finished my environmental science stream and was in the last year of computer science. However mid way through this year I was once again stuck with the same question as had plagued me in the last year of high school: what to do the following year. The same lecturer who had helped me with time management gave me the idea to pursue a fourth year computer science project that combined computer science and environmental science. I thought this was a great idea and applied for another year.

My fourth year of doing computer science was one of the most exciting times for me. I had started the year deciding whether to take up Japanese as a hobby. On the first day of the academic year, I met someone at university who lent me a book on Japanese after seeing Japanese text on my computer. I took this as a sign and started studying it on my own. In the mean time my computer science courses were incredibly fun. For example I had taken a games design course, where for part of it, we played with crayons and army men in order to understand how computer games could be designed. 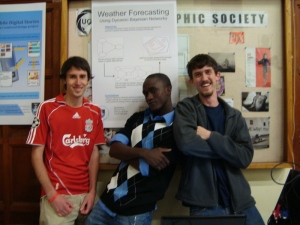 As part of the degree, a group project also had to be completed. I teamed up with two other guys, and we proposed our own project taking elements from computer science and environmental science. We also found three supervisors who offered to take on a more risky project, which was risky as it required communication between two different research fields. Despite the challenges our project was a success and this experience really got me hooked into academic research.

After this I decided to continue with the combination of research areas. I joined the climate group at UCT and started a masters degree in 2009. Doing atmospheric science was quite a bit different to my honours degree. The first thing was that it was much more of an individual endeavour, as everyone studying seemed to have less in common with each other than what I had experienced in computer science. The second thing was that atmospheric science research seemed to be much more globally inter-dependent, and therefore I was often exposed to what research was happening in other countries. The rest of the year passed, and in 2010 I decided to take my hobby of studying Japanese more seriously by enrolling in classes.

The Open Science Conference in 2011 which I attended in Denver, Colorado.

2011 saw a rather unique opportunity present itself. In the beginning of the year, us students were encouraged to get involved with larger projects that were undertaken by our climate group. This was to ensure that we got some experience in how research was undertaken after a degree, and how funding was generated. One project was of particular interest to me as it happened to involve a collaboration with Japanese colleagues.

Although I was involved in other activities, I am going to focus on how I was involved in this project. During the middle of the year I attended some project meetings and was introduced to some of the Japanese project members. In June an opportunity to go and study in Japan as part of the project came up. Fortunately, there were some colleagues based at JAMSTEC and the University of Tokyo who were associated to the project and had who had done research in similar fields to mine.

The view of Yokohama nearby to where I stayed in Japan.

At the end of the year I was given the fantastic opportunity of going to study in Japan as part of the project. There is nothing like taking Japanese classes for about a year and half and then going to Japan to study atmospheric science. I spent around two and a half weeks in Japan, getting the opportunity to meet many people and receive much feedback on my research. With no one to bail me out if I were to make a mistake, I quickly learnt that I had to be well prepared if I wanted to be confident in my work. The consequence of the exposure that I was given, was that I gained a sense of my academic self worth. This has served me well and I am very grateful for having been given this opportunity. After a busy year I decided to spend 2012 focused on my new doctorate degree that I had started.

In my academic career so far I have had many opportunities to meet people and go overseas to study, and so far I have enjoyed it immensely. As I pass the one and a half year mark of my doctorate degree, I once again start to ask that question: what I am going to do in the future. As of yet I am still undecided, but hopefully the future will be at least as interesting and fun as the past has been.

1 thought on “Guest post: My academic life so far”