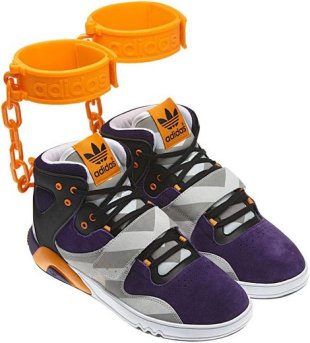 I’m, rather slowly, working my way through Nick Cohen’s You Can’t Read This Book which is all about censorship in the modern and Western world. In it one of the things he says censors must do is manufacture offence. If you don’t like something pretend it’s offensive and blow it completely out of proportion, even if whatever you’re being offended about is totally innocuous. I’ve found there’s a great example both of manufacturing offence, blowing something out of proportion and then using that commotion to bully people into doing what you want. It’s all because of some new Addidas shoes…

The shoes are look fairly ordinary, if ugly, with the exception of a plastic cuff for each ankle. It’s a bit weird but it’s all for a bit of fun, as the shoes promotion stated:

Got a sneaker game so hot you lock your kicks to your ankles?

But for some people this is an opportunity to blow a lot of hot air with the claims that the shoes are both racist and “slavewear.” I can see where the slave part comes from. The shoes have cuffs and slaves had cuffs. It’s a tenuous link but it’s there. How the pair of shoes is racist is a lot harder to imagine. If I had to guess I’d say it’s because they’re from America and in America Blacks were slaves. Of course that link is so vague you might as well say a cotton shirt is “slavewear” because Black slaves used to pick cotton. The shoes are certainly not racist and have nothing to do with slavery.

Cuffs, collars, chains etc can be associated with slavery but they can also be fashion statements. One or more of the aforementioned items feature in the wardrobes of goths, furries, metalheads and BDSM practitioners. Even stranger is if we just alter the design of the cuffs slightly, by removing the chain and replacing it with a plain cord. How would it know be any different from the leash on a surfboard? It wouldn’t and surfboards are not offensive and associated with slavery. So is the entire problem that the shoes have a chain instead of a cord? I don’t think it’s that either.

The problem is someone has gone out of their way to make an inoffensive piece of footwear offensive and to associate it with racism and slavery, both emotive issues. Once that starts everyone else starts piling on as well and it gets blown completely out of proportion. The worst part is that this manufactured offence actually causes a controversy that people actually give value to. People are so afraid of causing offence and being seen as racist that they will engage in self-censorship in cases where they haven’t done anything wrong.

Since the shoe debuted on our Facebook page ahead of its market release in August, Adidas has received both favorable and critical feedback. We apologize if people are offended by the design and we are withdrawing our plans to make them available in the marketplace.