This past week I have been on a field trip up in the George/Sedgefield area. I was part of a small team studying and removing Acacia stricta (hop wattle) plants, which are alien to South Africa. Overall I’d consider the trip a success. We removed a population of almost 1 000 trees over two days, mapped a few other populations and delivered fliers detailing the Early Detection and Rapid Response programme and to help identify various aliens. Outside of our official duties we also bought a few plants of our own, I will share mine shortly, and had some unexpected vehicle problems.

We were working in forestry land where the foresters and EDRR unit have an agreement. The foresters leave the A. stricta for them so that it can be properly studied and removed. This is quite labour intensive as for every tree we needed to either cut it down or pull it out, depending on the soil and size, record the GPS location, measure the height and base diameter and, if it was cut, apply herbicide to the cut site.

We had been at a nearby site a few weeks earlier where we had managed about 400 trees in one day. This time we managed 420 on the first day and, after skipping a day, 550 trees on the second day. As you can imagine, we are not talking about huge trees, sizes ranged from a few centimetres to the tallest being just over five metres and even the biggest were only a couple of centimetres wide. They are actually rather nice trees to work with as they are light, grow straight up and have no thorns or sharp edges. Their form also allows them to cluster extremely tightly.

Aside from plants there were also plenty of animals around. This consisted, mostly, of insects, grasshoppers in particular which became very apparent as you walked but I also saw stick insects, praying mantises and some rather impressive spiders. Unfortunately, my pictures of the spiders were blurred. This was, embarrassingly, after I attended a short talk on photography that included a technique that would’ve helped me, and one which I did use later. 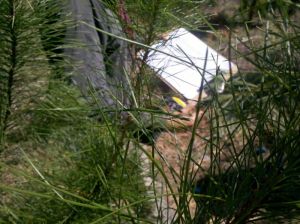 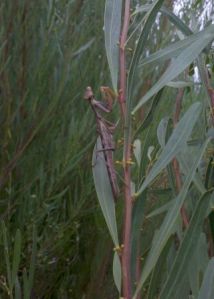 In between working on the A. stricta population was a day that started off raining and which we decided would be better, and more pleasantly, spent handing out pamphlets. Most of the trip was fairly standard, stopping at municipal and SANParks offices but there were a few highlights that day.

At one point we headed to the Saasveld campus of NMMU, which is just outside of George?. There we were able to see a whole troop of baboons right on the side of the road. One the one hand that’s probably an interesting event for students, but on the other they are quite dangerous and more than a slight nuisance. While they were very close they did not appreciate the car stopping and were not close enough for my phone’s camera to get any good pictures. We then continued on our way to Knysa, utilising the old George-Knysna road which is a lot slower than the N2 but far more picturesque.

As we were driving we passed by a nursery, which I suggested would be an appropriate place to leave fliers. Obviously, this was a plant nursery. It turns out to be have been a good suggestion as I think every member of our team wound up buying something, either on that visit or the subsequent one on the following day. I myself picked up three plants, mostly picked by what was visually appealing and for uniqueness. Unfortunately I don’t know exactly what they are, although I hear one is a Staplia. 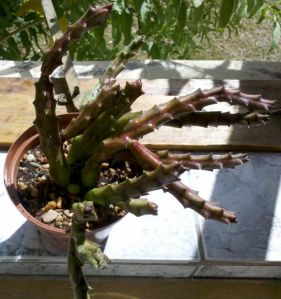 After all our pamphlets were delivered, we headed to a new forestry area to see another population of A. stricta which had been seen. We hadn’t reached them, however, when we drove over a rock. Just afterwards I heard a hissing sound which, when we checked, was confirmed as the air leaving the rear tyre from what was quite a sizeable gash.

We called our forester guide, luckily we had one at this point, who drove back to help us fix the tyre. This was particularly good for two reasons. Firstly it turns out that none of us knew how to change the tyre, it was a 4×4 bakkie with a completely different way of changing a tyre to what I was, barely, familiar with. Secondly when the forester tried to change the tyre it became apparent that the tools in the bakkie did not actually fit the tyre. If we had been alone we would’ve been in serious trouble. As it was the forester simply dropped us off to map the A. stricta, went to fetch the correct tool, fixed the tyre and then collected us again.

During the mapping we saw a small frog, which I managed to get a picture of, although it is concealed in the grass.

We still went to see another population of A. stricta at another site even after that narrowly-averted disaster and that gave me an opportunity to acquire some sour fig. Looking it up online, I found it ironic that sour fig is actually classed as a highly invasive alien in some parts of the world. 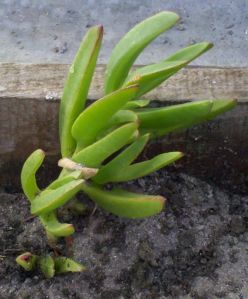 I had thought that was the end of the story but today it turns out there was more, the spare tyre turned out to have a slow puncture. We didn’t have the money to get a new tyre, especially on such short notice so it was decided that we would make the drive back with the punctured tyre! We resolved to stop at every town along the way and re-inflate the tyre, as well as keeping it slightly over-inflated. This strategy turned out to work really well and we made it back without further incident and without the tyre ever getting too low on pressure.

That summarises the trip and it’s highlight. Since my internship ends at the end of the month I don’t know whether I will go on any more such trips but it’d be unlikely anyway as the A. stricta removal is going to be given to contractors instead. Still, the experience was good and I can say that I have made my own contribution to the conservation of the environment.